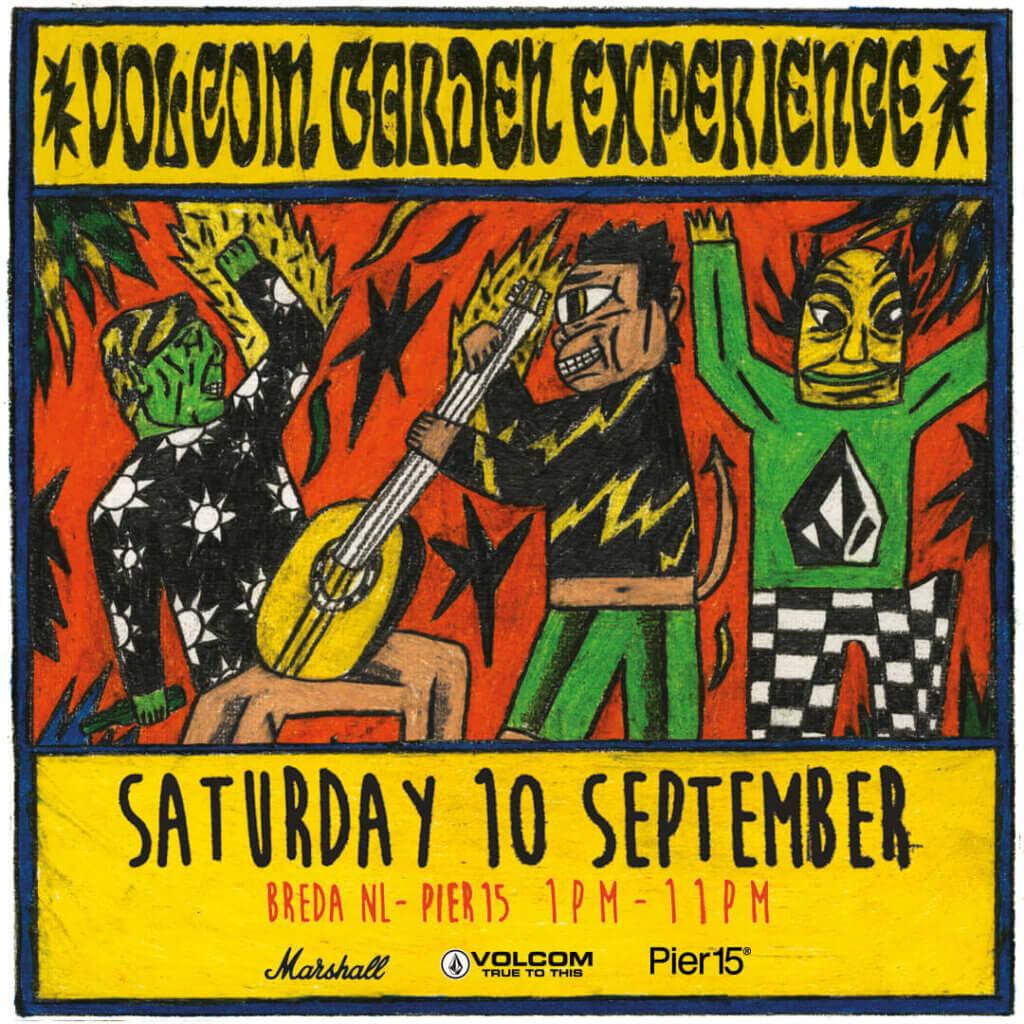 VOLCOM GARDEN EXPERIENCE 2022
AT PIER15 IN BREDA, THE NETHERLANDS

Volcom is bringing back this summer its mini festivals inspired by the Volcom Garden venue concept in Austin, Texas! After Fridas Pier in Stuttgart, Germany on July 2nd, the Volcom Garden Experience will take place at Pier15 in Breda, The Netherlands on September 10th.

Watch the recap video of the Volcom Garden Experience 2022 in Stuttgart, Germany:

Join us for guaranteed good vibes! Tickets are only 5€ with a complimentary drink and en lists you in a raffle to win some Marshall Tuft on portable speaker and one of the 5 Volcom Featured Artist products prize packs! 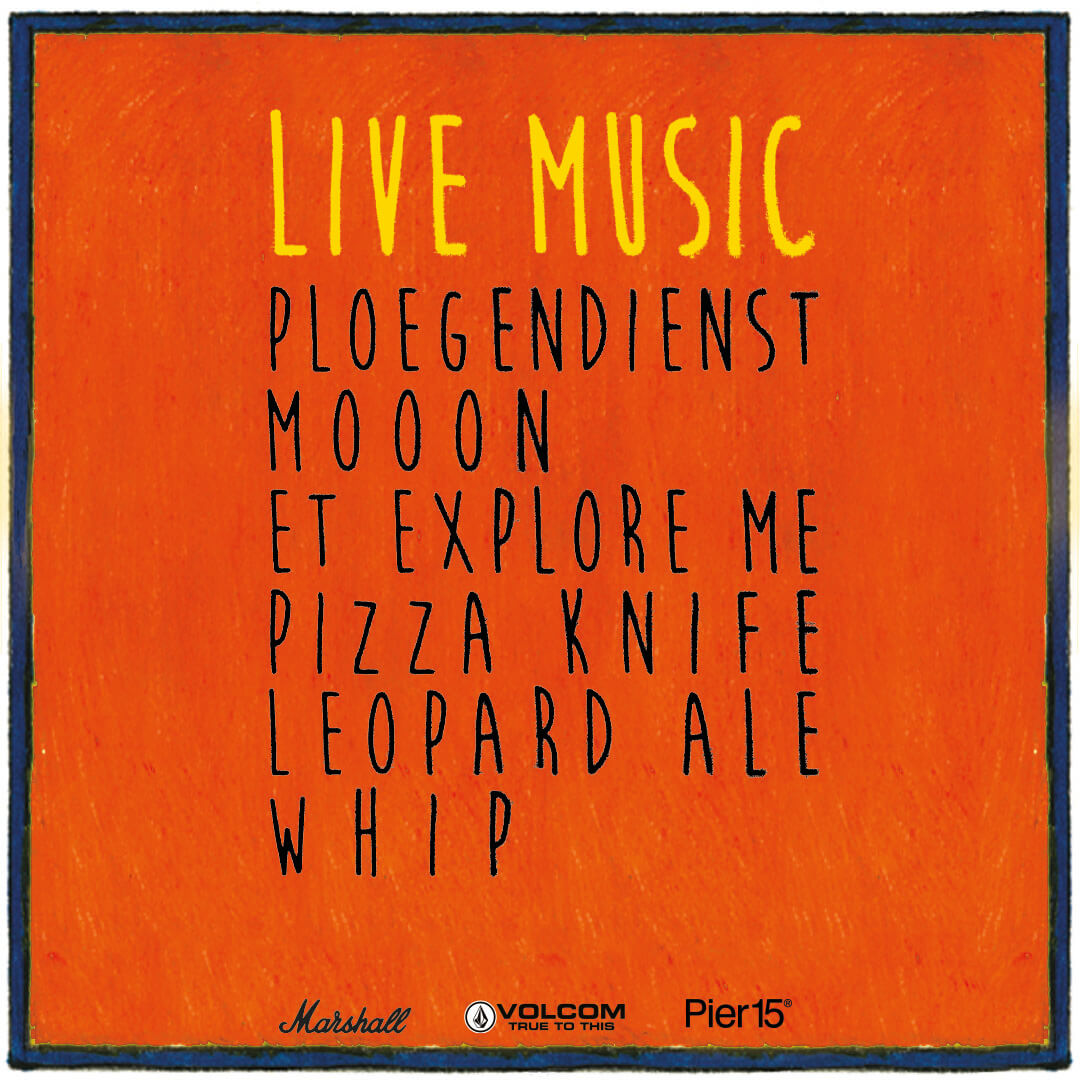 PLOEGENDIENST
‘100% anti-everything’ hardcore-punk supergroup Ploegendienst! Bastiaan from Aux Raus and MICH on bass, Michiel from Firestone on guitar, Bram from Adolf Butler and Malle Pietje en de Bimbo’s on drums and Ray Fuego from the DIY hip-hop collective SMIB screaming his brains out on vocals.

Way back, in the early 2013’s, a new and loud sound was born in a little backyard barn in a far away town called Aarle-Rixtel. They were producing what they would call ‘Good Music’.The brothers Tom and Gijs de Jong, and their cousin Timo van Lierop were feeling so groovy with their instruments, that they decided to form a new musical collective, called MOOON.

ET EXPLORE ME
Far Out Mind Expanding Psychedelic Punk from Haarlem in the Netherlands whom Squeeze you into an Organ grinding Fuzz Overdose Fest and Fly you to unknown dimensions. You wanna party, you wanna dig deep into the trenches of treble and bass, you wanna –oh I know you wanna just have a good time don’t you! And ET EXPLORE ME has got the rock n roll sniffin glue to get you higher than daylight. So pour a beer over your head and shake your ass, pump your fist and whatever you do, when you get home after the show, don’t fall asleep in a puddle of your own piss.
PIZZA KNIFE
TRASHY GARAGE PUNK FROM UTRECHT, THE NETHERLANDS. Influences range from garage punk to ’80s hardcore and thrash and the band has already played multiple Volcom events.
LEOPARD ALE
LEOPARD Ale is 100% bedroom-made music. From beer talks to quantum physics, the conundrums in their songs blast through the means of hip hop with a twist of surf rock and jazz. Bottoms up.
WHIP
Whip is the combination of Ben Kalb (Pizza Knife) and Bob Mollema (Fluisteraars). They don’t know what kind of music they make; it’s genreless but explores all the areas they find relentlessly inspiring individually and collectively. It’s a combination of frivolity and medieval danger. The music will always be subject to change, just like the weather, nature, people, and things. 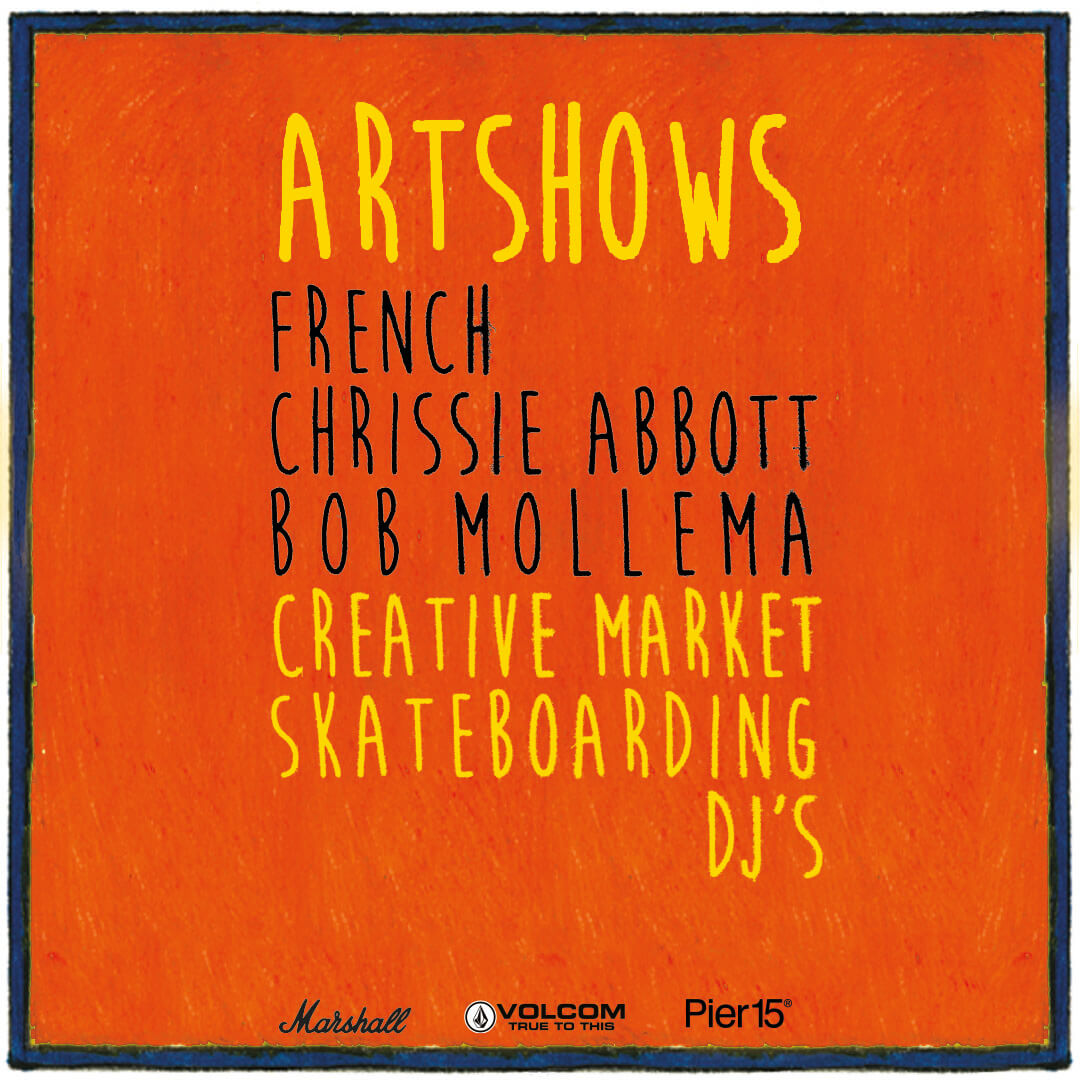 ABOUT THE ART EXHIBITION

CHRISSIE ABBOTT
Chrissie Abbott is a designer, art director & artist from London. She creates bespoke content, imagery, and animation for brands utilising mixed-media for online & print. Always trying to put a happy spin on things, to be a ‘colourful interlude to all the negative imagery that we are constantly bombarded with’. With music being one of her biggest inspirations, it’s no surprise that her favourite format is still a 12” record sleeve. She exhibits artwork internationally and creates zines.

BOB MOLLEMA
Bob Mollema, Bennekom 1990, works as an illustrator, artist and musician. He mainly works on large projects where humanity, absurdity, desire and dishonesty are central. These elements form a cocktail that results in critical, sometimes humorous, illustrations that make people think. A recurring theme is archaic Europe and the way people spiritually dealt with nature, incorporating the often naive and pure style of the archaic peoples into his art. He mainly works with graphite and eraser because the roughness, coincidence, margin of error & the analogue aspect are in keeping with his search for purity and authenticity. It is an act of rebellion against the uniformity that is slowly but surely devouring the world.